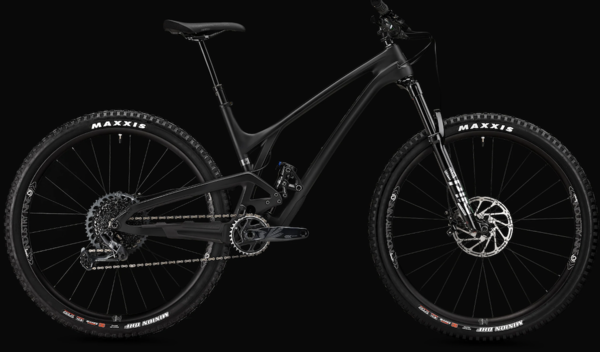 MORE POP, LESS FILLING
We took the most playful bike ever to manual the earth and poured Pop Rocks into a mouthful of Mountain Dew. And an inline shock makes sure the pop don’t stop. Bantam frame and build weights, plus a tyrannically steep 77-degree seat tube angle mean the Following is even faster up than it is down… even if that flat out seems impossible.

The Following is the 120mm 29er that keeps weight to a minimum and fun on full blast. It’ll climb all day and beg for more, it’ll high five its way through berms, gaps, rock gardens and eye-watering speed on the way down. It’s Evil’s version of a trail bike—the crusher of all things crusher, the rally car of two wheels, and every bit as unclassifiable as its inception—XC Rage, Shred-Country, TRAnihILation, TAll Mountain, nothing does it justice.

Too many bikes are chasing the same Reach horizon as everything gets numbed into aircraft-carrier lengths, and every bike uses the same 65-degree headtube angle—XC to Enduro+, hardtails included. You might as well just pick by color. Not us.

For the bike that started the entire shred-trail 29 movement, we can’t hit the mute button on loud, fast, and fun times. We need to let the volume roar and the rally car needs to claw after every extra-credit popportunity it can’t help but hit. And now, the rally car drifts uphill too.

In updating the Following, we’ve kept what makes it so special: lightning handling, shameless pop, and that uncanny ability to be there before you’ve even decided to go there. But we added in that die-hard XC determination with an over-the-pedals 77-degree seat tube angle. It’ll climb, and climb, and climb. And just like the Following we love, it’s first to the beer cooler. Always.

To do this, we actually kept the wheelbase somewhat reasonable—1,177mm for a size medium. But we still needed to add to the Following’s bounce off the walls enthusiasm so we’re spec'ing inline rear shocks. Fear not, you can run piggyback shocks, but inlines are full of shamelessly pop. Yes, we’ve said pop a lot. We like pop. We spec RockShox Deluxe Ultimate RC Debonairs and Fox Float DPS Factory EVOLs and the ramp is irresistible—dig deep, engage boost, gap farther.

In designing around SuperBoost+, it didn’t just stiffen things at speed, it allowed us to oversize each cohesive piece within the structural assembly. With everything bigger, and Evil’s renowned time and weather defying dual row, Klüberplex filled, angular contact bearings, it’s a sustainable ecosystem designed to withstand the rainforest. It also kept our feverishly fast 430mm chainstays and strengthened the rear wheel’s bracing angle. We did not shy away from the hammerheads—this is, after all, Evil’s trail bike and we don’t do anything halfass here. There’s full-on lockout routing for the rear shock, you can run a zero-stack headset, and we offer 120mm true lightweight fork option—a Fox 34 Step-Cast.

We went fully internal, tube-in-tube for tidy housings and seamless set up and we shrank the direct-injection carbon chainguide into a svelte modern design wonder. Those who want lighter still—yep, you can take it off.

This puts it in full in Strava-seek-and-destroy, overly fit pedaler territory, but this is a Following we’re talking about, and we made sure the Following is every bit the skateboard of the skinny dirt, slasher of the hidden line, defier of categorization destroyer. It’s the king of pop, more so than ever with an inline rear shock, now just with an additional 18mm of wheelbase and 25mm reach stability. It lost weight and gained strength—who doesn’t want that? And just like the original Following, it can’t be compared to anything, it’s too far ahead—not even in sight—up and down.

This bike is available in our shop in real life for test rides and purchase.